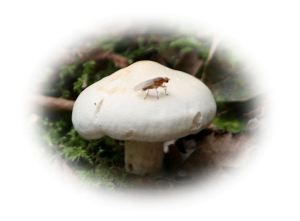 I got out into the woods late yesterday afternoon to start putting Andy’s great photography advice into practice. Almost as soon as I started I realised I still didn’t have a clue what I was doing, but fortunately the camera is so clever that it didn’t prevent me from getting some great (by my standards, which aren’t high) pictures. I’m looking forward to getting back there, maybe later today if it stops raining again… aagh… 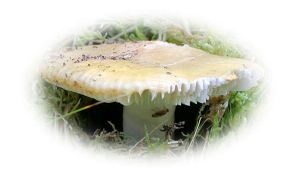 I’m currently psyching myself up to get out there and pick some wild mushrooms for eating back here at the sty, and towards that end I’ve recently purchased the most excellent and lovely Mushrooms: River Cottage Handbook No.1, by John Wright.

It’s a little disconcerting, though, to have read twice, in the space of the last few weeks, of people over here who’ve had very unfortunate (and in one case terminal) experiences picking and cooking mushrooms from the woods.

Nick Evans, who wrote The Horse Whisperer, his wife and two close relatives were poisoned by the Deadly Webcap, a relative of the Death Cap, and at least two of them have had to undergo dialysis. They picked them up in Scotland on Mr Evans’s brother-in-law’s estate in Moray.

And then, two days ago, I read that a 40 year old woman had died from eating a Death Cap mushroom she picked with a friend at Ventnor Botanical Gardens.

I can’t help wondering whether the recent reawakening of interest in picking and eating mushrooms has been responsible for these incidents. Even though Death Caps are profoundly toxic, I don’t think people often actually eat and die of them over here. Anyway, and as John Wright suggests in his book, if you only ever learn how to recognise one toadstool then let it be the Death Cap.

This entry was posted on Friday, September 19th, 2008 at 12:19 pm and is filed under Photos. You can follow any responses to this entry through the RSS 2.0 feed. You can leave a response, or trackback from your own site.